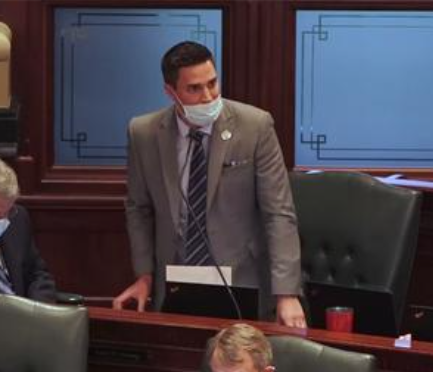 “I do not know how the Democrats can face the people of Illinois with a straight face and say this process was fair or transparent,” declared Rep. Adam Niemerg. “When the sponsor of the legislation to change the maps cannot or will not answer simple questions about what data was used or who actually drew the maps, that’s a sure sign that the old Madigan-style of doing things has not changed in Illinois.”

Rep. Niemerg reiterated that politicians should not be in charge of picking their own voters. He will continue to work with his colleagues, who have made campaign promises, to support a fair independent map process.

“I call on Governor JB Pritzker to keep his campaign promise to veto any partisan map drawn by politicians,” added Rep. Niemerg. “I join with community groups across this great state to oppose these maps today! Groups as diverse as the League of Women Voters, Reform for Illinois, Chicago Lawyers’ Committee for Civil Rights, Illinois Muslim Civic Coalition, Common Cause Illinois, CHANGE Illinois Action Fund, Latino Policy Forum, and the Mexican American Legal Defense and Educational Fund all oppose these proposed maps!”